Bringing together work by some of the world’s most notable artists, True Faith explores the ongoing significance and legacy of New Order and Joy Division through the wealth of visual art their music has inspired.

Curated by Matthew Higgs and Jon Savage with archivist Johan Kugelberg, True Faith is centred on four decades’ worth of extraordinary contemporary works from artists such as Julian Schnabel, Jeremy Deller, Liam Gillick, Mark Leckey, Glenn Brown and Slater B Bradley, all directly inspired by the two groups.

This weekend as part of the fantastic Festival No.6 in Portmerion, North Wales there will be a Joy Division related event. On Friday 4th September at 6.15pm at the Estuary Stage curated by Faber Social, Deborah Curtis, Stephen Morris and Jon Savage will talk about the Lyrics of Ian Curtis. If you are at the festival please come down to the estuary and join us.

More information at Festival No.6

To celebrate the 35th anniversary of 'Love Will Tear Us Apart' this summer, we are pleased to announce the re-issue of four iconic Joy Division releases on heavyweight 180-gram vinyl: 'Unknown Pleasures' and 'Closer' will be available on June 29th, followed by 'Still' and an expanded version of 'Substance' – both available as double-LP sets - on July 24th. The expanded version of 'Substance' will also be available on CD. The new version features two additional songs which were not included on previous editions: 'As You Said' and the Pennine version of 'Love Will Tear Us Apart'. 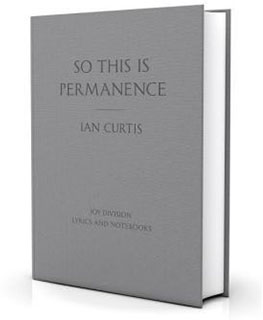 So This Is Permanence: Lyrics and Notebooks of Ian Curtis

Edited by Jon Savage with a foreword by Deborah Curtis, So This Is Permanence presents the intensely personal writings of one of the most enigmatic and influential songwriters and performers of the late twentieth century, Joy Division's Ian Curtis.

Interspersed with the lyrics are previously unpublished facsimile pages of Ian's notebooks, which throw his highly emotive lyrics into fascinating relief and cast light on the creative process of this singularly poetic songwriter.